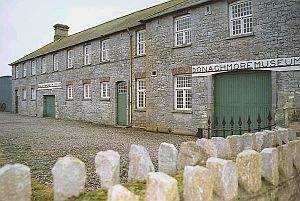 The Great Famine of 1845-1849 had a considerable impact on the national consciousness down through the years.

A system of relief was desperately needed at that time to relieve the suffering of the Irish people. The response was the setting up of the Poor Law Commission who built 130 Workhouses throughout the country.

Donaghmore Workhouse opened in September 1853.
The authorities consciously devised a policy of maintaining the lowest standards of living within the workhouse. The workhouse was portrayed as a last resort. People feared most the loss of dignity associated with them.

The lifestyle and rules of the workhouse system mitigated against the maintenance of a family structure. With a strong emphasis on religion and moral habits, wards divided the men from women, boys from girls.

This stringent sex segregation within the workhouse system ensured that the traditional family structure was all but impossible to maintain.

Donaghmore Union Workhouse closed its doors on the 25th September 1886.

One of the five buildings of the Workhouse Museum is restored to its previous state and stands empty with its white washed walls reflecting the bleak stories of life 150 years ago in the Workhouse.